A Quick Guide to Skeleton Coast in Namibia

‘Skeleton Coast’ is the perfect name for Namibia’s northern seaboard, populated as it is with sun-bleached bones from whales, seals, and unfortunately, some unlucky humans. Across Angola’s southern border to the town Swakopmund, ‘Skeleton’ is also echoed in the hollowed-out shipwrecks stranded on shifting sand-dunes, with no human settlement in sight. Namibia’s deserts were nicknamed ‘The Land God Made in Anger’ by Khosian bushmen. But the Skeleton Coast has an infamous reputation all of its own.

Over the centuries, a deadly mix of thick fog and strong currents caused many shipwrecks. It was a grim fate: any survivors would have found themselves stranded in an uncharted  desert, with no food or drinking water. Hungry hyenas and jackals would have been happy to see them.

Nowadays, tourists venture out to Skeleton Coast to see these rusted 19th century wrecks and towering whale bones for themselves. Skeleton Coast National Park was established in 1971. Covering 1.6 million hectares around the coastline in the Kunene Region, it remains a wilderness of untouched, striking beauty, with a diverse array of wildlife. Yet journeying through the National Park will give you more than a rare, arresting ends-of-the-earth landscape. It’s also home to a thriving seal colony on Cape Cross, and is on the doorstep of the Himba, one of Namibia’s most recognisable tribes.

Where does the name come from?

In John Henry Marsh's 1944 book Skeleton Coast, about the shipwreck of the Dunedin Star, he claimed Skeleton Coast was a nickname given by mariners. He writes:

There is no more treacherous coast in the world than this. Not only has it never been completely charted, but such charts as have been drawn by observation from the sea are unreliable. The shore supports little or no life, but it is alive itself. It moves. Day by day, month by month, it is moving westward, further and further out to sea.

Marsh was right. Thanks to the strong Benguela currents, the mountainous sand-dunes of Skeleton Coast Park are always shifting. The area’s skeletons and shipwrecks are often swallowed up, then eventually uncovered over time. According to travellers, these shifting sands can produce a roaring sound, as loud as thunder or aircraft taking off. 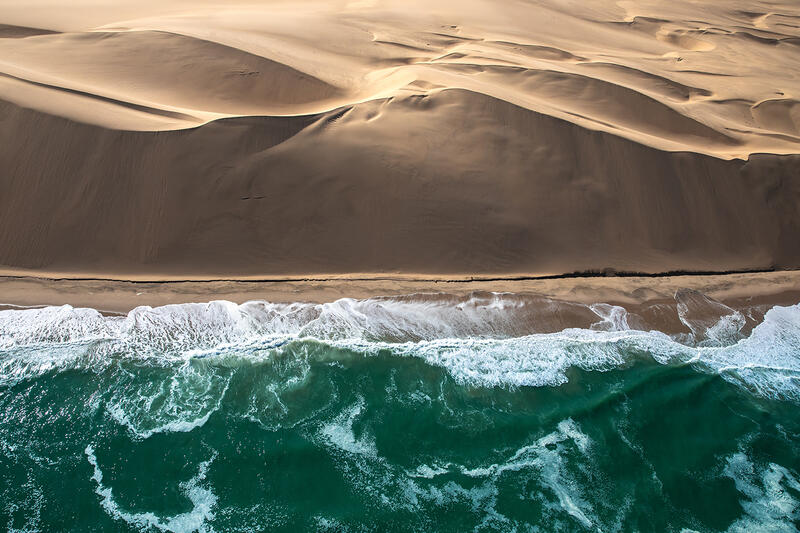 Skeleton Coast has housed many shipwrecks for centuries, since Portuguese and Dutch sailors passed by as they attempted to sail around the Cape of Good Hope to reach India. Some are now landmarks of Namibia’s coast: the Eduard Bohlen, a gigantic 310 foot vessel, makes for great photos. But in Skeleton Coast, Marsh chronicles the most famous one: the 1942 shipwreck of the MV Dunedin Star.

What happened to the Dunedin Star?

The MV Dunedin Star was a British cargo liner, carrying supplies during World War II. In 1942, it sailed from Liverpool, headed for Cape Town. While travelling along the West African coast, the ship struck something beneath the surface, causing it to take on water. To prevent it breaking up in the waves, the captain beached his vessel on the Skeleton Coast.

No one died in the shipwreck, but all the passengers, including children and the elderly, were stranded for days with only the meagre rations from their lifeboats. In the end, everyone was rescued, although the operation was fraught with difficulty. It involved several ships and military aircraft; one of the South African Lockheed Ventura bombers crashed during the operation. The remains of the Dunedin Star can still be seen today, roughly 20 miles north of Cape Fria.

What wildlife can you encounter in Skeleton Coast National Park?

The full range includes desert-dwelling elephants, as well as lions, black rhinos, cheetahs, crocodiles and zebras. It makes for an impressive safari, yet these animals are often rare sights, particularly the elephants and rhinos. It is far more common to see springbok and gemsbok, antelope native to Southern Africa.

The rocky shoreline of Cape Cross hosts the world’s largest breeding colony of South African fur seals. They thrive on masses of fish from the nutrient-rich Atlantic ocean.

There can be as many as 210,000 seals during the November–December breeding season. As newborn seals cannot swim, they are left on the beach while their parents hunt. Large throngs of baby seals mewling on the sand is a breath-taking sight. However, it leaves them vulnerable to predators, while their parents run the risk of encountering great white sharks.

Cape Cross is also a National Heritage Site. In the 1800s, thousands of tons of guano (dried droppings from fish-eating birds) were gathered and exported to Europe for use as a fertiliser. There’s no longer a market for guano – or for the large amounts of dung produced by the vast, crowded seal colony. Expect a beautiful sight if you visit, but a far less appealing smell. 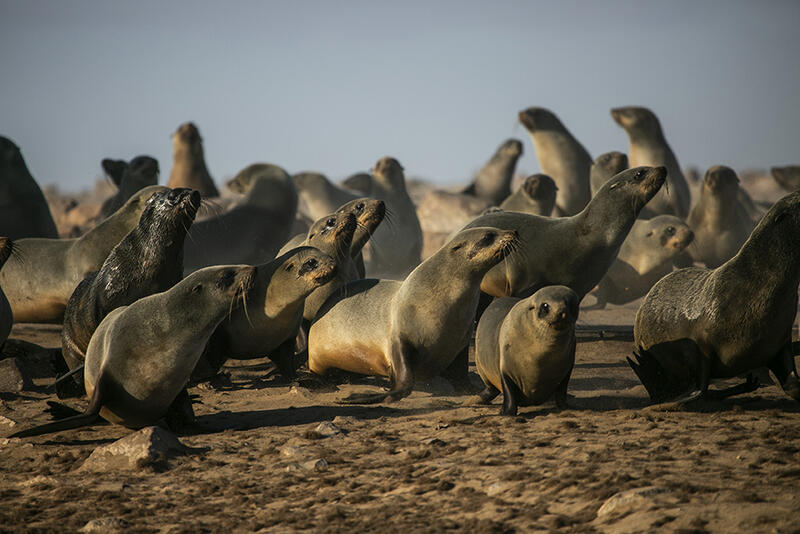 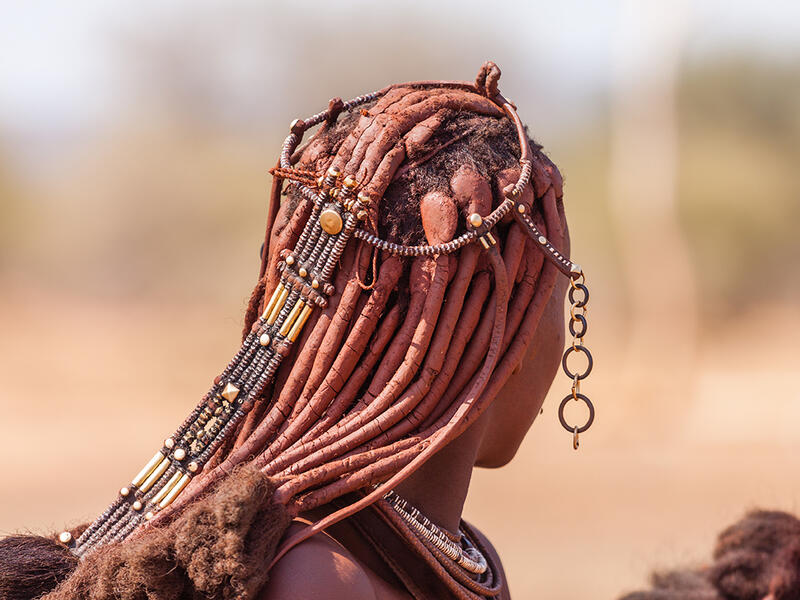 Who lives near Skeleton Coast?

The Himba people live across the Kunene Region, as well as in parts of neighbouring Angola. They are a semi-nomadic tribe, whose lifestyle is mostly sustained through farming cattle, as well as growing crops like maize. They live in huts with thatched roofs, usually made by the women from branches with soil and manure as a binding agent.

The Himba are easily recognised by their copious use of otjize, a paste of butterfat and red ochre. It’s applied to the skin, giving it a reddish tint, and in the hair to form thick braids. Himba women mine the ochre and apply the paste daily, using it to beautify themselves. In an arid environment with little water, it’s also a practical way of keeping clean.

Nowadays, they straddle the line between preserving their traditional culture and adopting modern lifestyles. Some Himba avoid leaving the villages, while others send their children to state schools in nearby cities. Himba from neighbouring villages can also be seen in bars and pubs in Opuwo, some of which are Himba-owned.

With the new Skeleton Coast tour, Land Rover Adventure Travel offers you the chance to see it all up close, behind the wheel of a Land Rover Defender. You drive an SUV built for the toughest terrains, from Swakopmund to Windhoek, visiting famous shipwrecks, the Cape Cross seal colony and Himba villages, among other awe-inspiring sights across the National Park. Skeleton Coast is a corner of the world unlike any other: preserving history in its bones and shipwrecks, while new life thrives around it.