Red Bull X-Alps: What it takes to compete in the world's toughest race

Imagine competing in a race so tough you have a one-in-five chance of finishing. Across the world, prestigious competitions see the greatest athletes fight for sporting glory. But in how many will most of those athletes never even get to see the finish line?

Red Bull X-Alps is a hike-and-fly race across the Alps, where around 30 elite paragliders compete against each other – and the treacherous alpine conditions. The athletes of Red Bull X-Alps are the best of the best, pushing their bodies to the limit just to finish the race.

It was always a gruelling test of endurance, but this year Red Bull X-Alps has upped the stakes for the tenth race. The competitors will travel 1,238 km, the longest ever distance. Starting in Salzburg, they’ll go west through the Alps, loop around Mont Blanc, then back into Austria for the finish.

Apart from the six-and-a-half-hour overnight rests, the race is continuous. There’s also no option to travel light: athletes carry 10kg rucksacks, the equivalent of a car tyre or a medium-sized dog on your back. 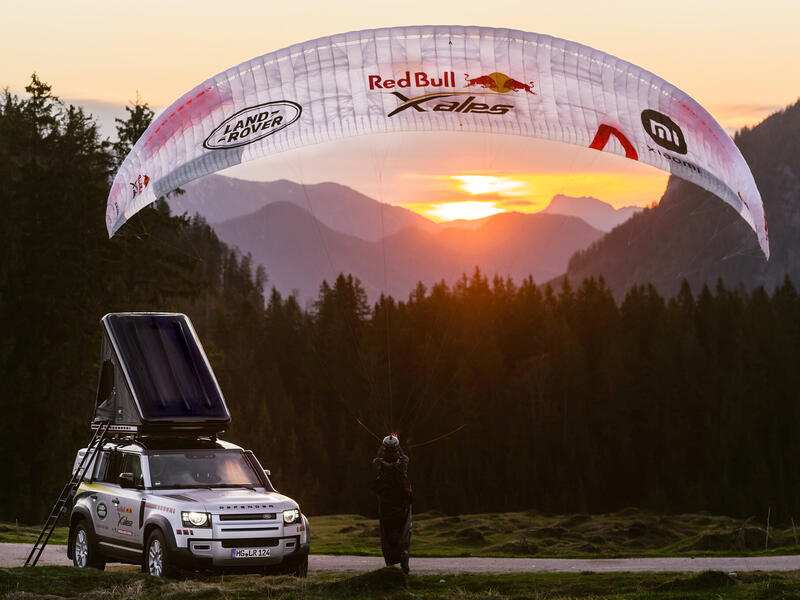 Red Bull X-Alps was created in 2003, inspired by Toni Bender’s paragliding flight across the Alps from north to south in one journey, where he slept rough and carried all his own equipment. His incredible feat caught the eye of Austrian pilot Hannes Arch, who went to Red Bull with an idea for a new competition, to recreate Toni Bender’s journey in the space of only 12 days.

During the race, the athletes often travel further than the race’s official distance. The route is only set out with the 12 checkpoints. Between them, participants must chart their own course, over anything from paved paths to rough alpine mountainsides.

The 33 athletes selected this year represent countries from around the world, and a diverse range of ages and sporting backgrounds. Rookie Thomas Friedrich, 20, will race alongside 61-year-old, five-time veteran Kaoru Ogisawa. They all share an inhuman level of skill in paragliding and mountaineering – and a relentless drive to succeed.

We caught up with two of the athletes preparing to push themselves to the physical and mental limit in this year’s race.

Laurie Genovese is a French Paragliding World Cup and World Championship veteran, one of only three women in the competition. A paragliding teacher and physiotherapist, it’s her first Red Bull X-Alps.

“I’m here to discover and to see how I can manage it, and also to learn from the best athletes in the world.” While she aims to reach the finish line, she also savours the experience of competing itself. Her goal is to have a lot of fun with her team: “It's a lot of preparation so it would be a shame not to enjoy it.” 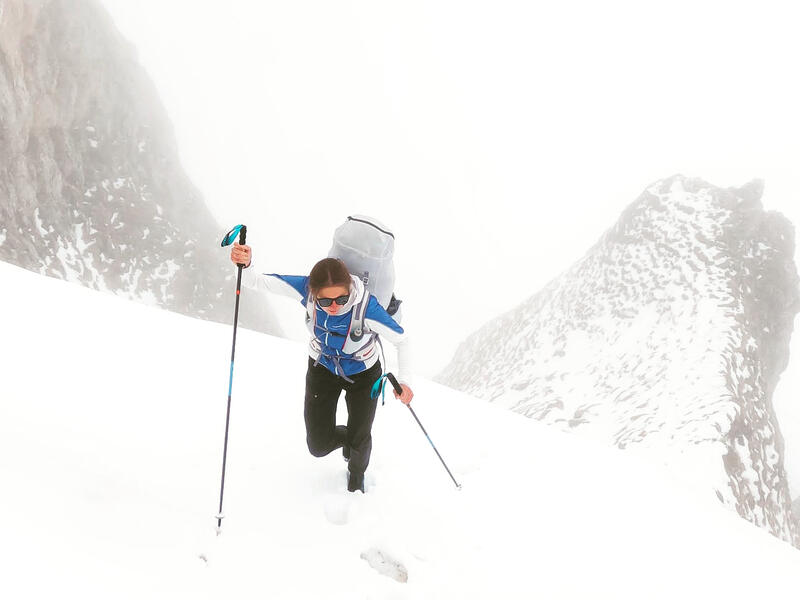 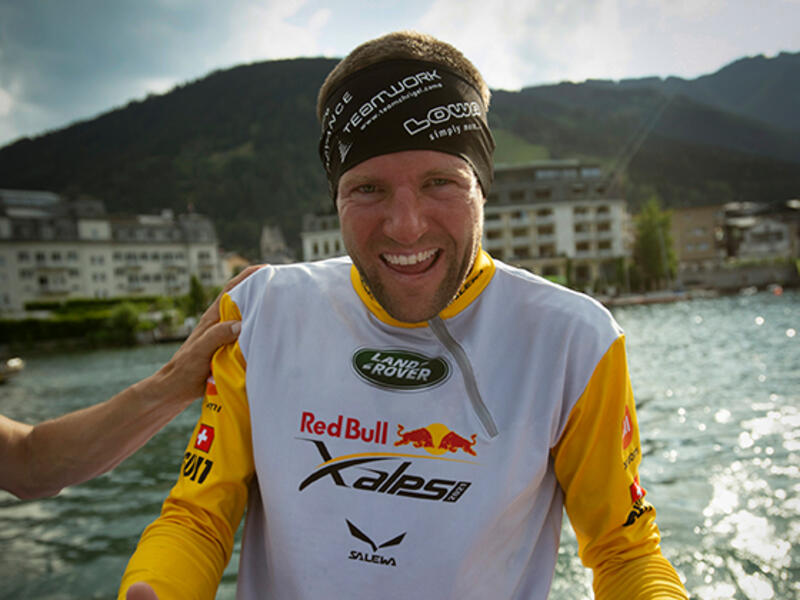 It’s a sentiment shared by Christian Maurer, Swiss paragliding professional and six-time winner of Red Bull X-Alps. The reigning champion is ready to go again. “I am always happy to start again,” he says, “because the new route and the weather bring a new challenge.”

He’s also eager to take on all the uncertainties that paragliding in alpine weather can bring. “The freedom of being like a bird fascinates me.” he says. “And of course the dynamics and the many possibilities you have with just a piece of fabric and a few lines.”

As the athletes know, the race requires not only significant physical strength, but mental strength too. At every point, they will need to make tough decisions that could potentially cost them the race, not to mention their safety and wellbeing. “Both physical and mental strength are important and go hand in hand,” Christian says.

Mental strength also means coping with fear, which can be worsened by the long, demanding nature of the race. For Christian, when dealing with his fears, belief in his own autonomy is key. “For me, it is important to feel whether I can still influence something myself so that it turns out well. Often you are influenced: when flying, I have my glider under control, but I have to assess the conditions.” 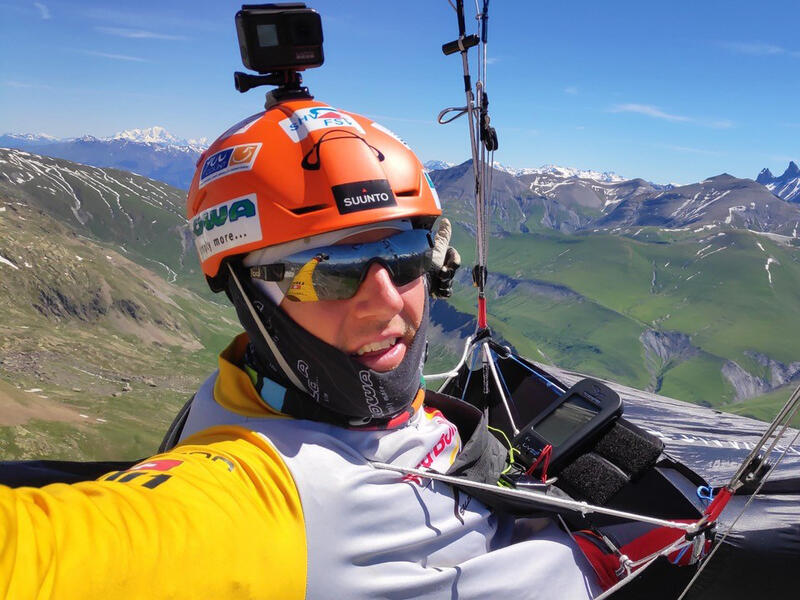 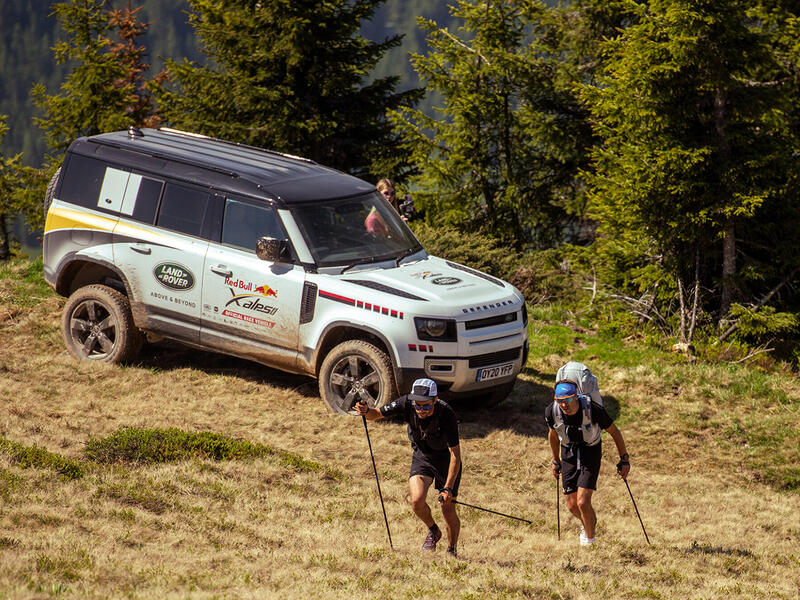 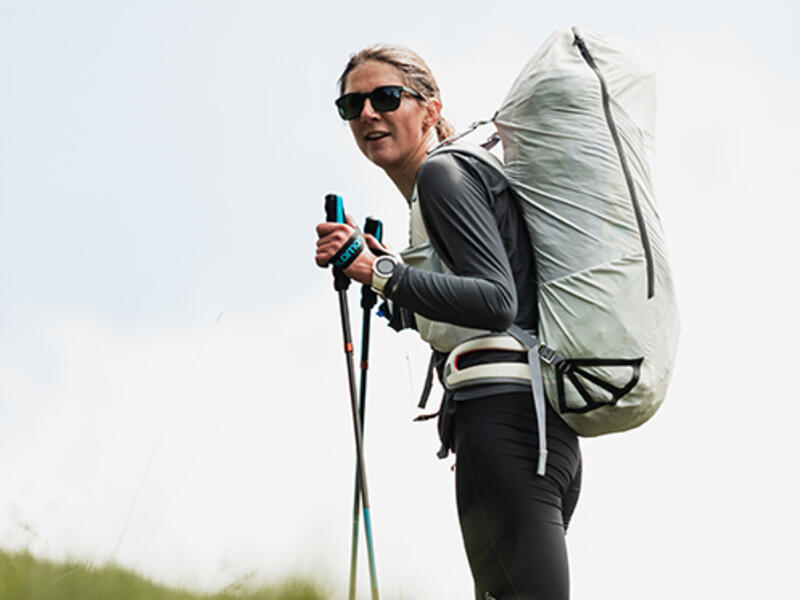 And for Laurie, fear isn’t something to be simply dismissed. “Fear is important, it keeps you alive”, she says, “but you have to learn how to manage it. I always try to be objective in the face of fear, to be aware of the real risk and my commitment. I always know in the back of my head that I can give up or go back to the ground.”

Many of the athletes will have to face their fears during the competition, but Laurie has an additional obstacle. She suffers from vertigo, which can suddenly make her dizzy. It’s the last thing you’d want to experience on a steep mountainside, competing in the world’s toughest race.

Yet she refuses to be helpless. “Vertigo is often a projection of a future fall. We must succeed in not projecting ourselves mentally. I have to practice, to put myself in a situation of vertigo without getting too scared.”

PUSHING THEMSELVES TO THE LIMIT

Participating in Red Bull X-Alps is the true definition of putting yourself outside of your comfort zone. While the athletes push themselves to realise their sporting potential, they aren’t flippant about the toll it can take on their bodies. “It is by seeking your limits that you learn to overcome them,” Laurie advises. “In risky sports you have to be very careful, because pushing a limit too far can cause injuries. It's always a balance.”

“I think good decisions can prevent you from having to risk all the time,” Christian says. “With our experience and self-coaching, we try to leave our comfort zone only as much as necessary.”

The athletes of Red Bull X-Alps have been building themselves up for years, even decades, to achieve their sporting potential. In Christian’s case, it has given him unprecedented results. With his six wins in a row, he has set a record that will likely stand for a long time to come. “You can't force success,” he says, “but with serious preparation and the right amount of investment, you're also luckier, and so far, I seem to be luckier than others. The many hours I have spent on the glider since I was 14 and the competition experience, especially my uncompromising, efficient flying technique, certainly help me.” 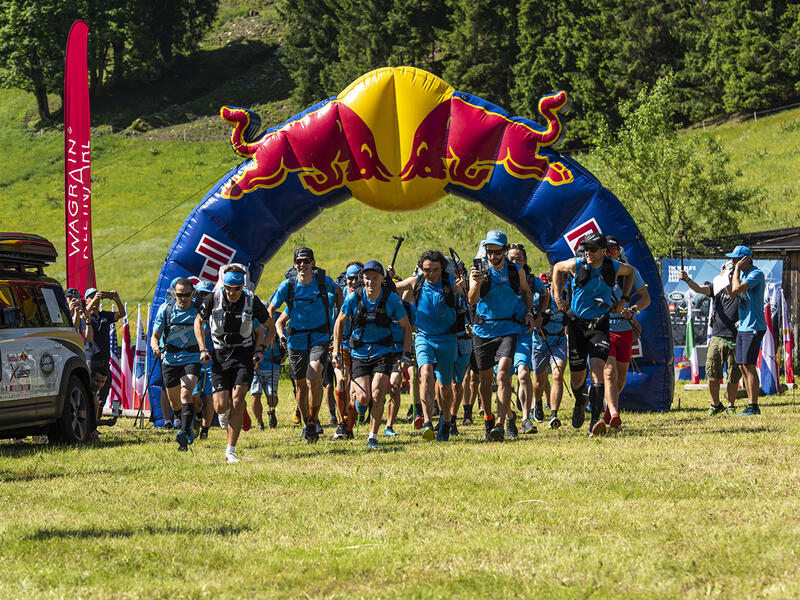 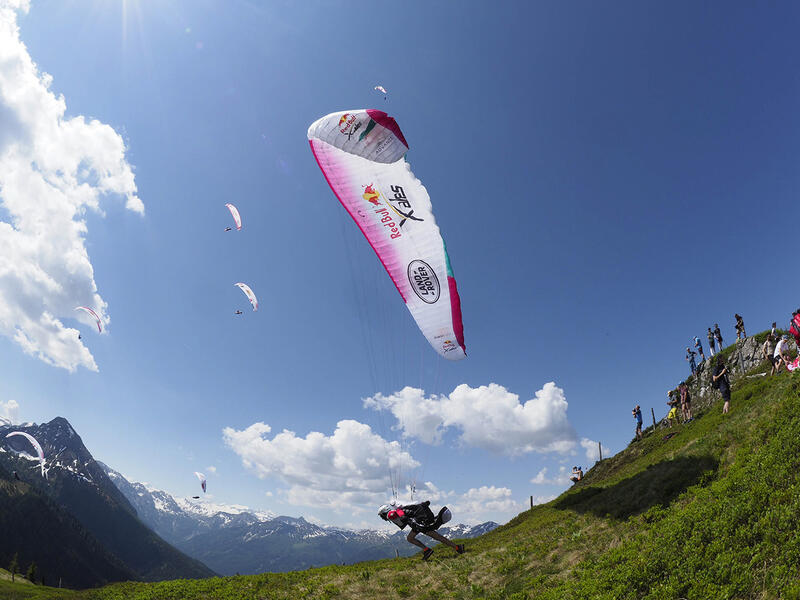 WHAT HAVE THEY LEARNED?

Both of them started young in the sport. “I made my first flight at 14 years old,” Laurie tells us. “Since then, I have never stopped.” For Christian, his history with paragliding overlaps with the beginning of the sport itself. “Where I grew up, the first paragliders came flying in 1986 – that fascinated me as a four-year-old.”

Yet after years of relentless training, honing their paragliding and mountaineering skill, they know the path to sporting greatness shouldn’t be walked alone. For Christian and Laurie, the exchange of valuable advice and stories with their sporting peers is a key part of training.

“As an athlete,” Christian says, “I want to gain new experiences and later pass them on as a speaker and coach.” His goal for this year’s race is to focus on the experience, as he looks to a future beyond Red Bull X-Alps glory.

And Laurie’s advice for the elite athletes of tomorrow? “Take time to learn,” she says, “because learning is not necessarily practicing. Spend time observing and talking with other athletes. Be humble in front of nature: one is nothing compared to it. If you respect nature and yourself, you can only enjoy.” 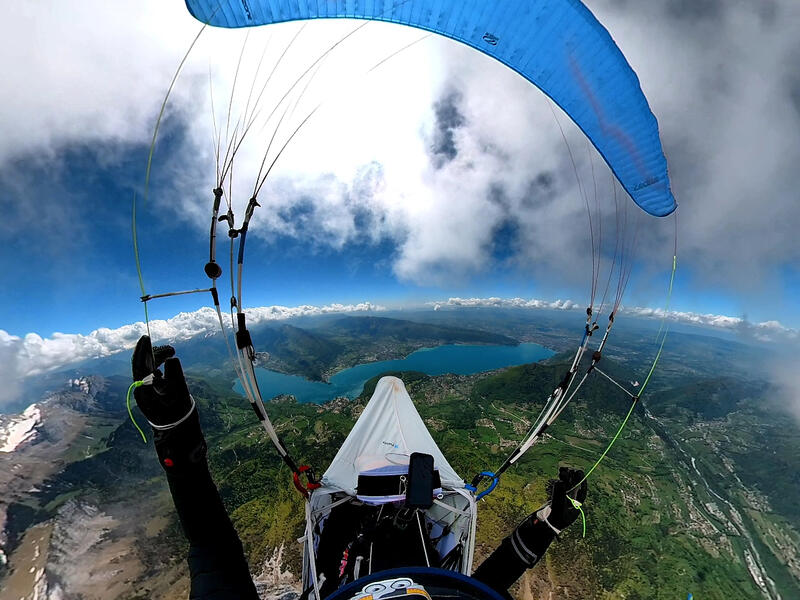 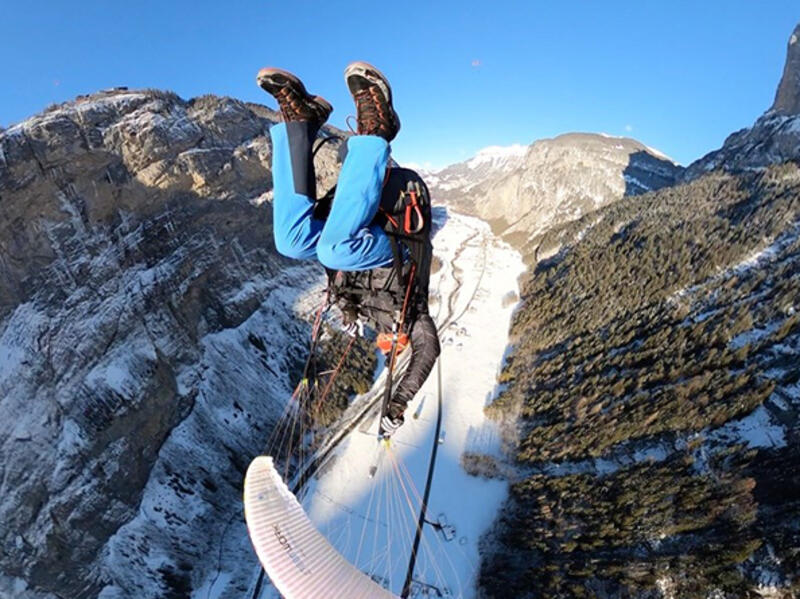